Severn Trent is part of the Gas and Water sector.

Severn Trent Plc Ord 97 17/19P is listed on the London Stock Exchange, trading with ticker code SVT. It has a market capitalisation of £5,311m, with approximately 238m shares in issue. Over the last year, Severn Trent share price has been traded in a range of 825, hitting a high of 2716, and a low of 1891.

My company Severn Trent want to be Carbon Neutral by 2030 & want an all electric fleet by 2025 , we serve from Wales to S****horpe , good time to push our product

Expecting a sall in sp, the divi yield looks uncompetitive to me.

Qatar is a victim of economic sanctions by the countries that surround it.. every week a ship full of gas arrives at Milford haven in south Wales.

Now we know where the money ends up,,, and as we can deduce it is very big money... we can clearly see it does not go back to Qatar.... So it stays in pounds sterling,, or as natural gas is sold in dollars,,, someone is playing the money markets over Britexit. I seem to remember a chart of the £ to the $ dollar and remember it is being played, but now we know a proportion of that £-$ playing money is invested else where.

Well they certainly brought on the cheap,, and then they had a 15% discount on the £-$ rate

Classic example of a Arab purchase,, on the cheap and never on the high or middle price.

DOWNSIDE: like Kuwait when it was invaded, if the government (family) has problems back home, the stake will be sold off

PS : i am invested in SVT for many years,,, and also since privatisation,, am also a user of there water

2nd DOWNSIDE: Anyone can sell business water, serious here,,, and one does not need to own the infrastructure to so this... in a couple of years selling to the general public will by anyone will kick in.
Now the real consideration is who has water extraction rights (old ones),, well the Duke of Westminster has them,,and I seem to remember he owns well Westminster and Chester,, so landed estates will soon have a new income ie unused water rights

now who else has water extraction rights farmers, nhs hospitals and heritage railways

3rd Downside well simply the Labour party (and with a change of labour party leadership, they would win a general election immediately as the maths of politics has altered with the Britexit party now existing,, we cannot get away from the maths in voting (note I did say they need a change of leadership))

Severn Trent has posted a 6.8% rise in profit. All indicators are positive despite unusually hot/dry summer last year.

Factors closer to home may impact the sector too
Major supply interuptions over the winter/summer combined with rapidly increasing incidences of pollution may be received negatively by the city.

Explore Severn Trent PLC. You will find information for investors, our share price and returns as well as all our career opportunities. 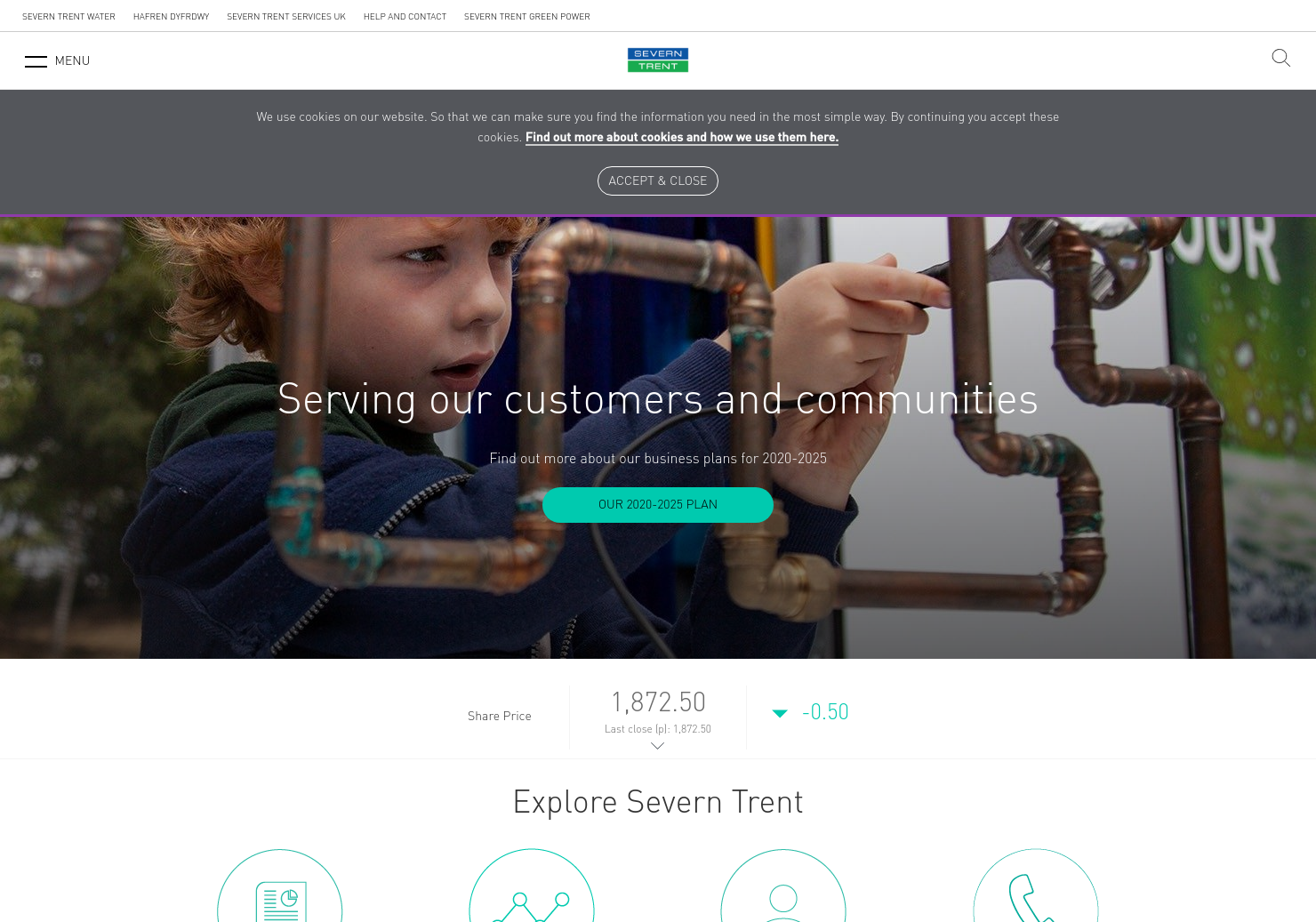