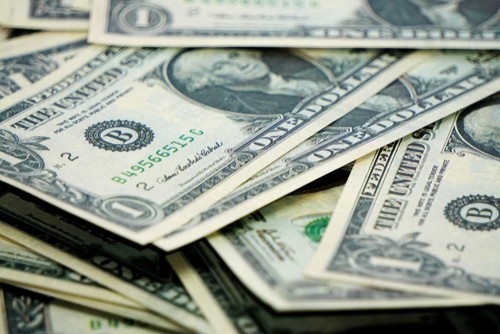 In the FX markets, the strength of the US dollar has continued this week. There were lots of central bank talk and one of the key messages was the fact that the Fed say they are not going to step in and control the rise in the US 10-year yield. One Fed member went as far to say that the 10-year treasury yield could even be trading higher than where it is now (1.65%). The latest quarterly GDP number in the United States beat the analyst expectations of 4.1% to print at 4.3% and initial jobless claims data printed at its lowest level since the pandemic began showing some signs that the picture could be improving in the jobs market. On the political front, Joe Biden addressed the nation yesterday and promised to deliver to 200 million doses in his first 100 days in office. He also addressed the nation's relationship with China. Interestingly, he said he is not looking for confrontation but looking at the details of the latest top-level talks between the two nations in China the atmosphere seemed frosty.

The EUR/USD chart shows the extend of the USD strength recently but not only that the EUR weakness. The EU are now coming to teams with a 3rd wave. German cases are continuing to rise and restrictions have been increased again in some of the key nations in the EU. The strong German IFO and PMI data were not enough to save the single currency from falling. It could be a case of seeing how the vaccine roll-out progresses to see if there will be some relief in the EUR. In a recent development, the EU has now said that vaccine producers will need to honour their commitment to the EU before they can start resuming exports to other nations. It feels like market participants will need to see the progress to believe it at the moment looking at how heavy the euro is at the moment.

The level to watch on the downside to watch is the lower red shaded area at around 1.1614. At the moment the price is in the mid area from the previous consolidation zone which was prevalent between July and November 2020. For now, the lower highs lower lows are continuing and the bears are firmly in charge.

There has also been a heavy theme of yen weakness in the markets this week. The Japanese central bank narrative has been they are are still looking to keep in place the yield curve control (YCC) mechanism while the US are willing to let the market decide. This then means the carry is heavily USD positive. In the last couple of weeks, there has been an increase in the spread between the US/Japanese yield curve. The BoJ announce more flexibility in JGB yields at +/- 25bp around 0%, more flexibility in stock buying but the BoJ still remain the largest holder of Japanese stocks though their ETF buying spree.

Looking at the chart, the price is now heading toward the key level close to 110.00. It has been a constant move of higher highs and higher lows but if there is to be any slowdown at that level the wave low at 108.40 is the one to watch. Below that 107.00 is the main area of support but the pair is still way off that at the moment. On the topside, if the resistance does break the next high could be the 112.22 high from 10th February 2020.