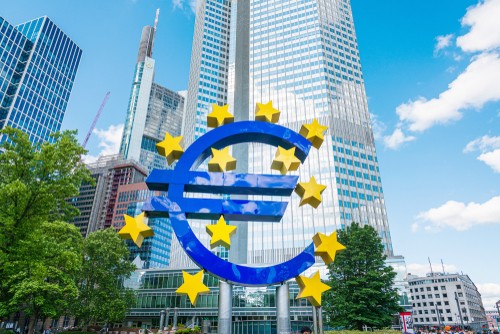 It was ECB this week and we also had the US finally put pen to paper on the fiscal stimulus deal we have all been waiting for.

First up the ECB, as expected, there was no change to interest rates but there was one major change to the asset purchases. Instead of beating around the bush with all the technical jargon the easiest way to explain it is that the ECB are to ramp up their bond-buying to disrupt the current rise in bond yields.

The Pandemic Emergency Purchase Program, or PEPP, will remain unchanged, at a total of EUR1.85 Trl. Recently the purchases have been lower than usual and now the central bank say they will make up for that and ramp them up. The ECB statement said, “Based on a joint assessment of financing conditions and the inflation outlook, the Governing Council expects purchases under the PEPP over the next quarter to be conducted at a significantly higher pace than during the first months of this year,”. There were then source reports after the meeting that suggested the ECB PEPP monthly target lower than EUR100 Bln and well above EUR60 Bln purchased in February.

The chart below is the 10 year German bond yield chart. There was a significant fall today around the time of the meeting but some of the move was pared later in the session. It has not quite hit the support level just above -0.40 but there could be a move lower in the futures. 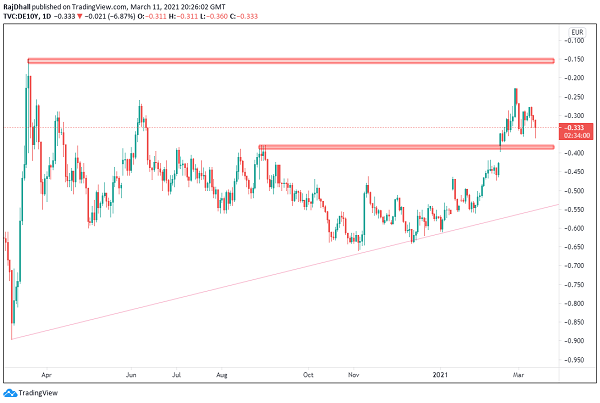 Looking at the EUR/USD daily chart now there has been some decent bullishness that took the pair through the 1.1950 resistance area. This area had been prominent in the past especially in August 2020 where the pair had multiple rejections. looking higher now there as still some obstacles in the way for the bulls. The next one being the internal trendlines marked in light red. The mean value of the higher distribution stands at 1.2130 and this could be a very sticky point too.

In terms of news from the US, the government finally agreed on the stimulus deal and it passed through the house of representatives on Tuesday. Then on Thursday Biden signed the deal and it has now been ratified. Looking ahead now there are more stimulus cycles planned but they will be more focused. It has been reported in US press that the US could be looking to start a fund that invests in technology to make the nation less reliant on China. The fund is said to be focused on semi-conductors, 5G networks etc. Adding to this there will be an opportunity for banks to invest in government based infrastructure projects. 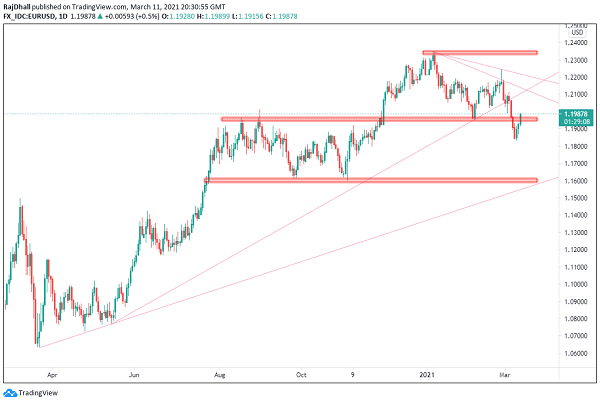 Another big story has been the collapse of the Japanese yen. USD/JPY has moved 6.4% higher in a 63-day period. This has largely been due to the change in US yields as mentioned in previous articles but it could also be a sign that the risk environment has been turning positive in recent sessions. The Dow, Dax and S&P have registered new all-time highs this week and the bulls seem to be in serious control following the minor blip from the aforementioned rise in bond yields. The USD/JPY daily chart below shows the price failed to hit the resistance at 109.75 but stopped in its tracks at 109 on the button. If there is to be a correction the 107 area could now be in focus but if stocks continue to rally the market may have its sights set on higher levels. Conversely, the price action does look like a pattern that might be bearish but I would take that with a pinch of salt and if there is to be a retracement keep an eye on some key Fibonacci levels. 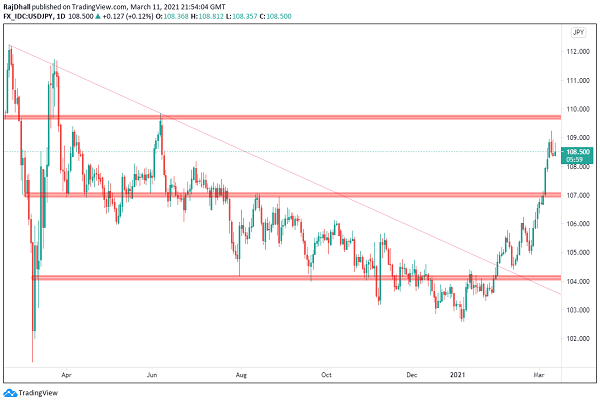 Thanks for the article. Its very useful