We interviewed GraniteShares' CEO Will Rhind from New York, soon after they launched a suite of ETP's which allow you to invest in three different baskets of giant US tech stocks. Watch the full video here.

Saga is part of the Tourism and Leisure sector.

Saga Plc Ord 15P is listed on the London Stock Exchange, trading with ticker code SAGA. It has a market capitalisation of £542m, with approximately 140m shares in issue. Over the last year, Saga share price has been traded in a range of 407.8, hitting a high of 417.8, and a low of 10.

When I worked at Saga it was within the Travel division. Half of our annual bonus payment was based at company level and half was based at divisional level.

If I recall correctly, during the last 10 years that I was there, the Travel division qualified for its bonus on 7/8 years and missed out on 2/3 years (one of which was due to the eruption of the volcano in Iceland). So travel was making a positive contribution - and hitting the annually mandated profit targets - for the majority of the time.

Just an observation from my experience there and make of that what you will.

Having said that, in the later years, I had the feeling that Travel continued to exist partly for marketing the brand and partly due to its important part in the history of the company. As you rightly point out the margins are rather thin compared to the insurance operation. Staffing levels in travel were also very high in comparison to insurance.

Insurance was always seen as the senior partner - at least during this century. When I first worked there in the mid-1980s, it was still very much Saga Holidays plus other offerings such as the magazine and some insurance services.

If we can avoid volcanoes, pandemics and airlines failing whilst owing money, then travel can operate at a profit every year - the profits may not be as huge as from insurance but every little helps.

So the question may be - is the "every little helps" in the good years sufficient to outweigh the damage done in the bad years?

Hi ****, yeh working on 100% for 2022, we shouldn’t need isolation cabins by then but if it comes to it we will work through that nearer the time. As far as we’ve publicised it’s the first UK cruises that will be 80% but I would predict like you say the rest of possibly 2021 will be at the reduced capacity but nothing confirmed passed the UK cruises yet

Banbury what I don’t understand when it comes to Tour is why it is so loss making?

They are running a tour operator’Titan’ but don’t own planes, hotels, or other fixed assets.

Essentially all they do is have staff to take bookings, do the admin and general other operational stuff.

They book flights through 3rd parties just direct customer could do. They employ ‘Ground Handlers’ in each country, who look after everything abroad and the operation abroad. So effectively if everything stops like it has, where is the big outlay? If that makes sense?

Beach and horse I hope you are both right ?
Some eye watering numbers from the 2020 and 2019 accounts all pre pandemic

Cruise has some potential to be earning accretive but its relatively small. Tour is 80% of travel and is a I think a dead dog or rather elephant

I must admit to smiling about Millionaire’s recent post copied below the investment potential is because of insurance and in spite of travel.

“Earnings as a result of the unlocking of travel turning losses into profits which will be transformational to the groups finances.

The investment case is quite simple here and no need to overthink it... we are essentially buying future travel earnings in perpetuity at a snip of the actual future value. Few realise this and are thinking far too short term.

I have many friends still working in the city who are starting to wake up to the investment potential here and some have started building v hefty positions now.”

Apologies if this is not what everyone wants to hear but it’s factual. Be good to understand the positive investment case for Tour. We know form there presentations Cruise has potential.
Banbury

Cheers Beachbum and thanks for the confirmation re bookings.
Have you any idea if they’re selling 80 or 100% for 2022?
I’ve emailed to ask but still awaiting a reply from them.

Saga PLC is the UK’s specialist in products and services for life after 50. We are constantly evolving to stay close to our customers. 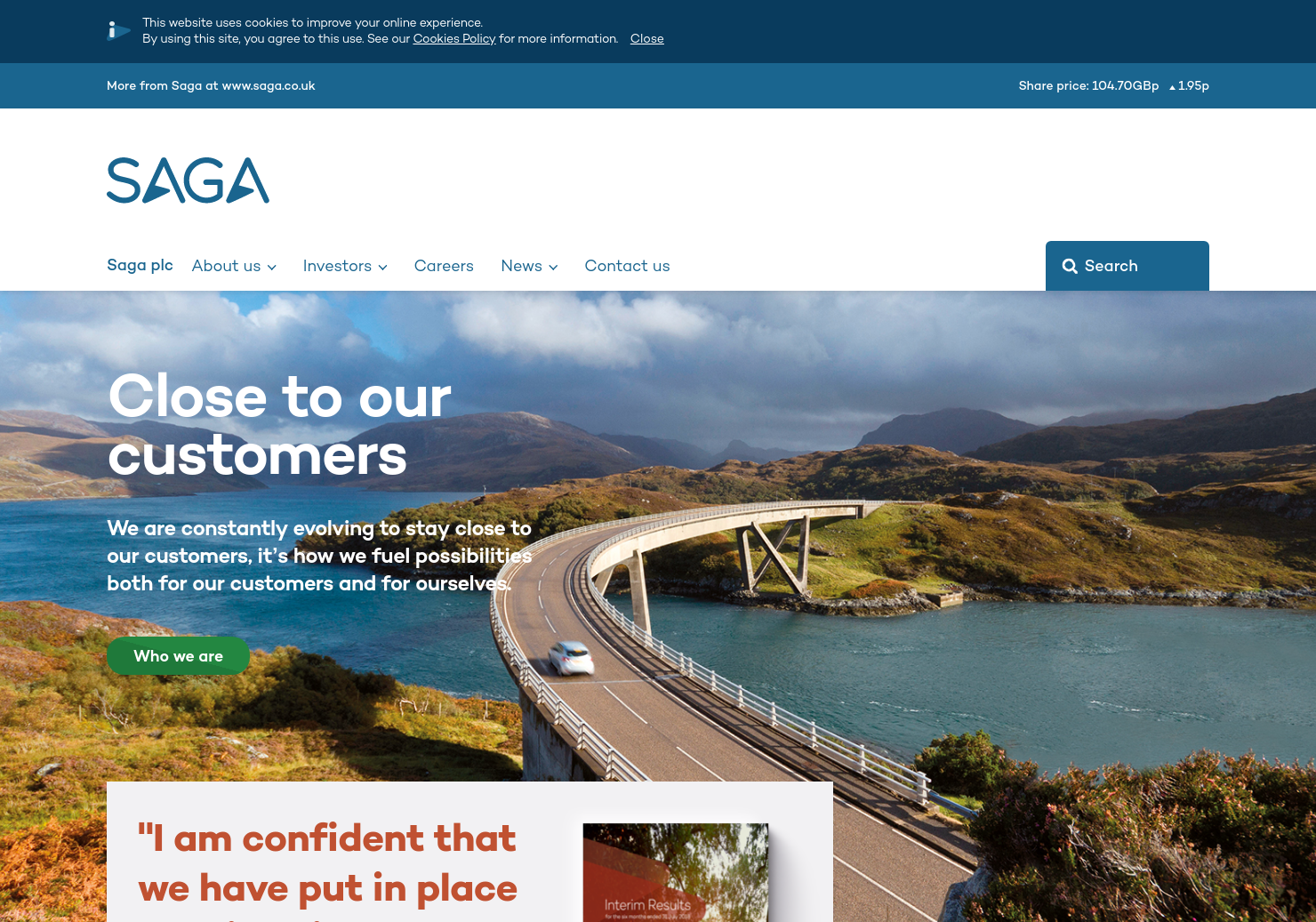