Hunting is part of the Fossil Fuels and Distribution sector.

Hunting Plc Ord 25P is listed on the London Stock Exchange, trading with ticker code HTG. It has a market capitalisation of £450m, with approximately 165m shares in issue. Over the last year, Hunting share price has been traded in a range of 176.7, hitting a high of 296.8, and a low of 120.1.

Mis-timed my entry here a few weeks back but looks like this is ready for another assault on 300p. Lots of upside remaining here given oil price recovery

Going into 2022 sales could pick up slightly to $650m, with a break back upwards into profitability of around $5m.

On the face of it, that looks both dismal and dull, but I have faith in the group’s management to safely turn the group’s profitability around before resuming its previous growth path.

It is obvious that the group has a strong enough balance sheet and cashflow to cope with its recovery back into profitability this year. About £702m of assets shows the company standing at around a 35% discount.

Brokers are not in unison as to their price objectives for the group’s shares – RBS rate the shares a ‘sector perform’ up to 305p, while Jefferies rate the shares as a ‘buy’ looking for 360p. Barclays raised its price from 260p to 300p and recommend ‘overweight’ portfolio positions.

Less than three years ago the shares were trading at 845p, but by September of last year they had eased back to just 120p. At the start of this month the shares peaked at 297p, and they closed at 275p last Friday night.

I am looking for the shares to be back over that peak and heading for 350p fairly soon and then head even higher.

Accordingly, I now set my target price at 350p.

"Hunting – sounding the horn for the recovery"

Hunting has had its ups and downs over the years, but Mark Watson-Mitchell reckons better times are ahead.

Although it has been in existence for over 140 years, I have only followed this group for the last four decades.

From its origins of shipowning, it ventured into oil tankers, and later it went into aircraft servicing and manufacturing, even owning an airline. Then in 1938, it started oil prospecting in Texas and later moved into Canada, before progressing into petroleum retailing, lubricants and specialised products.

It has reinvented and reorganised its operations several times in its history and always shown its ability to adapt to changing fortunes in its marketplace.

I can remember having several breakfast and lunchtime meetings in the company’s offices overlooking Nelson’s Column in Trafalgar Square, with Richard Hunting, the group’s former Chairman. I always enjoyed listening to him and his team describing the operations of their business.

It has had its ups and its downs over the years. However, I have always been impressed by the professionalism that its management has shown.

Irrespective of whether it is intended for oil, gas, onshore or offshore, conventional or unconventional, its broad range of products and associated services spans the lifecycle of the wellbore.

It manufactures the premium, high-end tools and components that are required to extract hydrocarbons across that lifecycle of an oil and gas well.

An impressive portfolio of intellectual property

Hunting’s substantial IP portfolio is a significant barrier to entry for competitors and allows it to defend margins and offer more operational flexibility, particularly in a downturn.

It has a truly global footprint, employing nearly 3,000 people operating in 11 countries with distribution and with the use of its products extending well beyond those countries.

The group declared its final results for the 2020 year two weeks ago and its Report and Accounts are due to be published this coming Thursday (18).

The group’s AGM is due on 21 April, at which time we should get the latest trading update.

The reported finals showed that 2020 was not a good year for the group, which was understandable due to the massive reduction of activity in the global oil and gas marketplace.

But oil prices have moved significantly better in the last few months and better times are now being anticipated.

Estimates for the current year suggest similar revenues, with the loss falling to only $5.4m.

Going into 2022 sales could pick up sl

Moves from outperform to sector perform, but target remains at 305. Market reaction? Goes up a bit!

HUNTING PLC is an energy services provider to the world's leading national and international oil and gas companies, manufacturing and distributing products that enable the extraction of oil and gas. 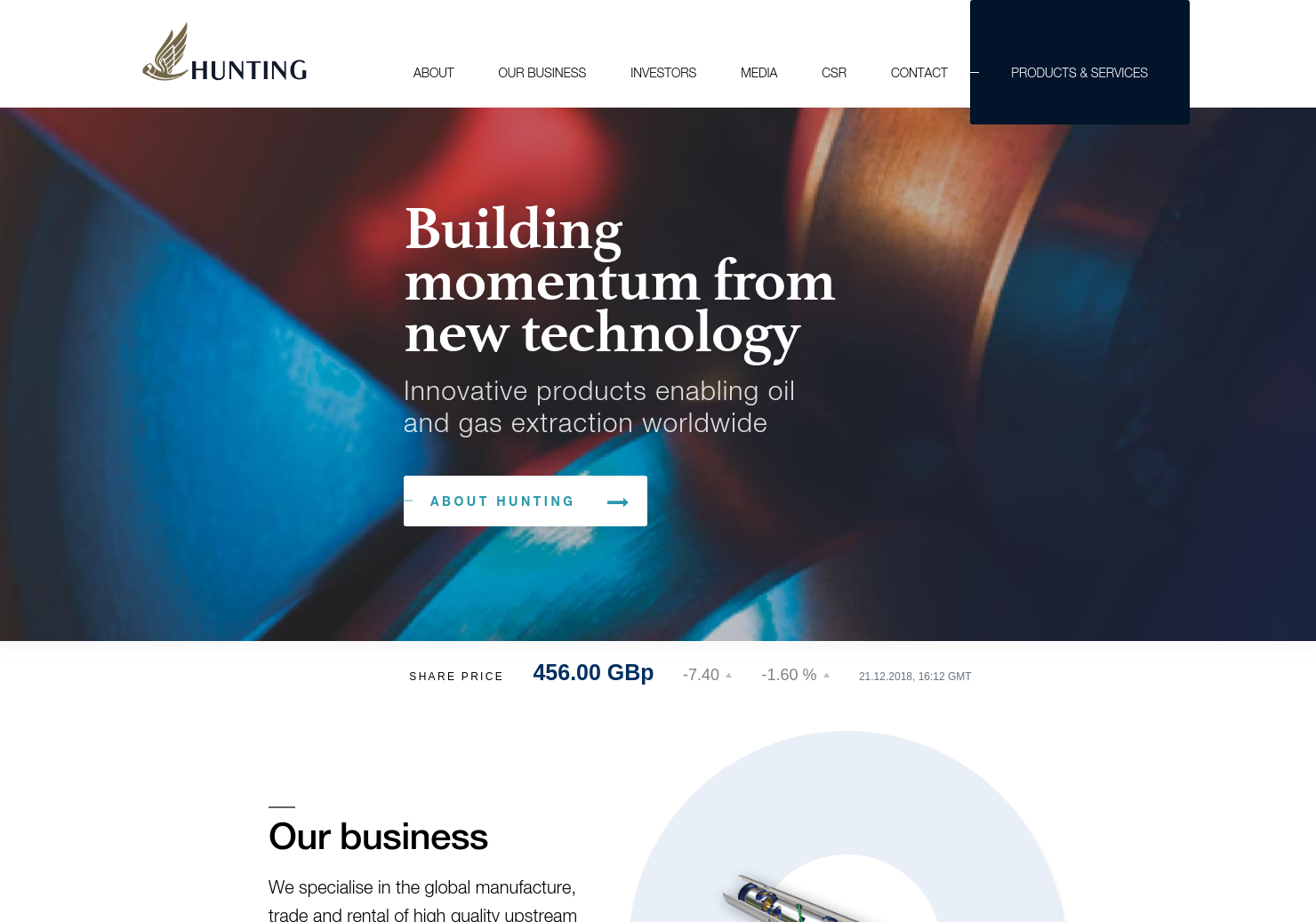